New partnership doubles from 16 to 31 the number of parenting support centres across Italy, and is supported with ‘Scale Up Impact’ multi-year programme 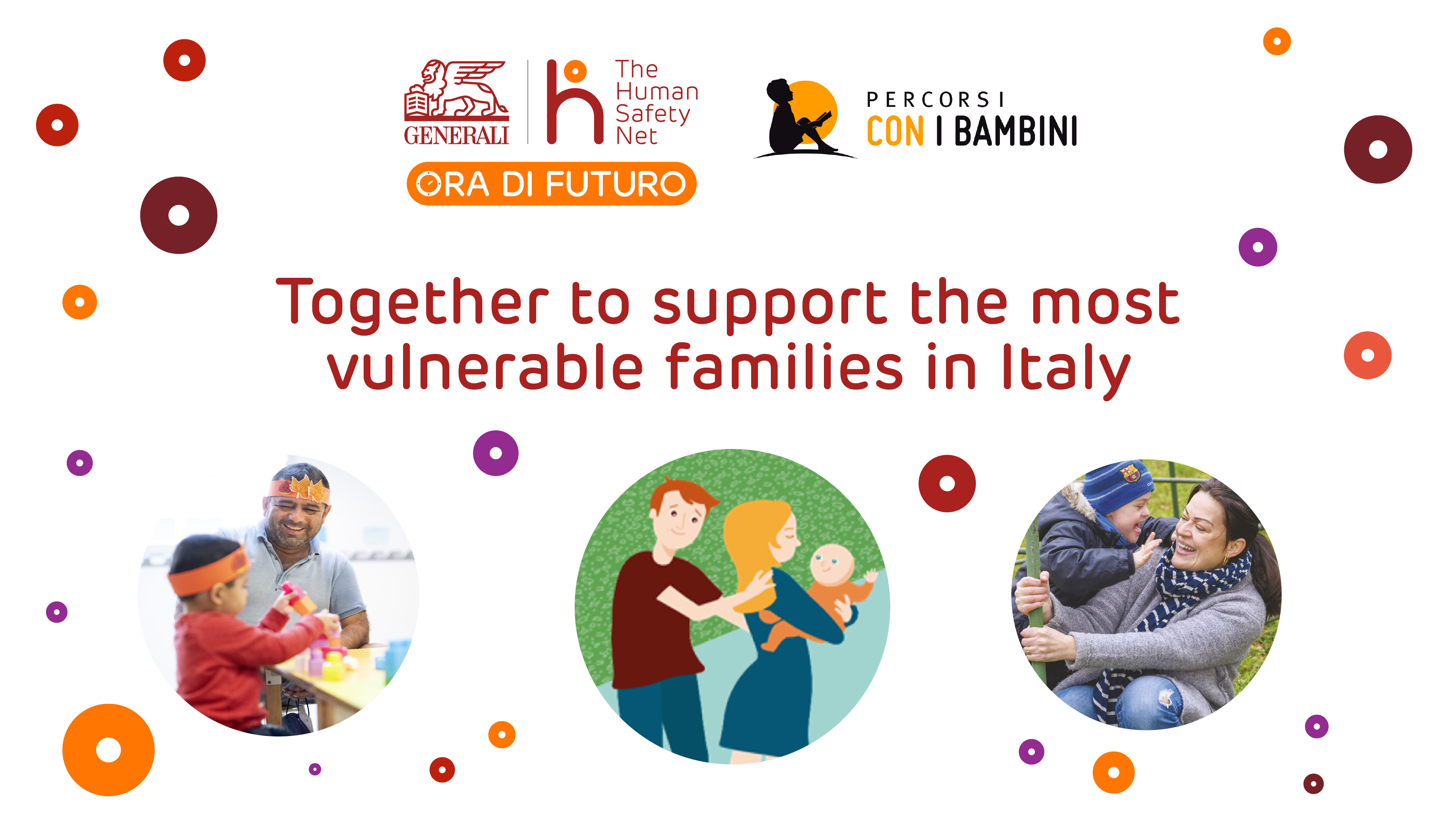 Trieste/Rome – Vulnerable families with young children will now have twice as many parenting support centres across Italy thanks to The Human Safety Net joining forces with the non-profit social enterprise Con I Bambini.

The new collaboration between The Human Safety Net, a global movement of people helping people set up by the international insurance company Generali, and Con I Bambini, a non-profit organisation, entirely funded by the ‘Fondazione con il Sud’ to develop the programs of the ‘Fund against educational poverty in young children’, doubles the number of grassroots The Human Safety Net/ Ora di Futuro parenting centres across the country from 16 to 31.

The agreement is part of the co-financing initiatives promoted by Con i Bambini in collaboration with other co-financing entities interested in experimenting with interventions aimed at combating juvenile educational poverty, and of recently launched ‘Scale Up Impact’, an innovative multi-year strategy that aims to amplify the social impact of The Human Safety Net by encouraging other like-minded organisations to join in, so building up cross-sectoral collaboration between the public, private and social sectors.

With a total investment of more than €2million, The Human Safety Net and Con I Bambini are supporting CSB to reach an additional 7,200 parents and 6,000 children, expanding the ‘Villaggio per Crescere’ model in 15 locations across Italy.

Chairman of Generali, Gabriele Galateri di Genola, commented: “Through The Human Safety Net, we tackle key challenges and with ‘Scale Up Impact’, we’re supporting selected programmes and organizations through strategic, multi-year investments. Our objective is to mobilise a wider net to achieve even greater results, which is why we are delighted there are 13 companies, foundations and agencies co-investing with us in this first edition of the programme, supporting the four NGO projects we have selected.”

Galateri continued: “Our For Families Program is supporting parents in vulnerable circumstances by providing parenting centres and parenting courses. Today, we are happy to join forces with Impresa Sociale Con I Bambini to double the number of The Human Safety Net’s Ora di Futuro parenting centres across Italy. We are convinced it will help build stronger foundations for the children of the future.”

The Human Safety Net’s NGO partner, Centro per la Salute del Bambino (CSB), will lead the new collaboration with Impresa Sociale Con I Bambini. The programme will also involve a wide range of other stakeholders, including municipalities, leveraging the additional support of Cooperativa Sociale Orsa and Associazione Porta Aperta.

Chairman of Con i Bambini, Marco Rossi-Doria stressed the scope and significance of the initiative. "We are very pleased with this alliance with The Human Safety Net and Generali, aimed at improving the present and future of many children and their parents, through the strengthening of services and a greater impact of the educating communities in the territories involved. This co-funded action is part of a vast activation to combat educational poverty that brings together more than 7,100 organizations in the third sector, schools, institutions and private individuals, reaching half a million children and young people, favoring a systemic approach that places children at the center of the actions."

Rossi-Doria continued: "Educational poverty is a complex phenomenon because it is multidimensional, affecting economic conditions, health, relational aspects and in general implies the lack of opportunities that, unfortunately, today involves one third of children in Italy albeit in different ways. In order to effectively fight it, it is important to start from childhood, implementing educational alliances and the involvement of all stakeholders. The alliance with The Human Safety Net extends an already existing educational worksite, making a common treasure of good practices".

The Human Safety Net’s global Scale Up Impact strategy identifies high-potential projects that already have a proven social impact and then provides them with both financial and non-financial support. At its heart is ‘open net’ collaboration with other organisations, so increasing the overall capability to support families and refugees around the world.

By working together, The Human Safety Net’s NGO partners and the public, private and social sectors can replicate successful models, so transforming the lives of more vulnerable people.

The first three-year cycle of Scale Up Impact was launched in 2020. During this period, the Human Safety Net is investing €7million to provide its NGO partners with an additional source of funding to deploy their programmes on a nationwide scale.

In the first edition only, The Human Safety Net and its NGO partners aim to boost the number of family centres for parents with children aged 0-6 in an additional 43 cities in Argentina, Serbia and Italy. Furthermore, they aim to open five new incubators for refugee entrepreneurs across France and Germany.

Building on its open net principle, during the first edition Scale Up Impact has teamed up with 13 co-funding companies and associations, mobilising a total investment of €4.5million. The first four NGO partners that are receiving both financial and non-financial support to upscale their successful models nationwide are Haciendo Camino (Argentina), Novak Djokovic Foundation (Serbia), Centro per la Salute del Bambino (Italy), and SINGA (France and Germany).