For each cap Generali will donate €1 for the Villaggio per Crescere in Trieste. All caps will be recycled and brought to a new life

For each cap Generali will donate €1 for the Villaggio per Crescere in Trieste. All caps will be recycled and brought to a new life.

11.788 high-quality plastic caps have been collected at the Generali-The Human Safety Net stand during the week of the 50th Barcolana. Almost 130 kilos of plastic, collected thanks to the generosity of the visitors, will be recycled and given a new life. For each cap, Generali will donate €1 to the Centro per la Salute del Bambino (CSB) for the activities of the Villaggio per Crescere of Trieste. 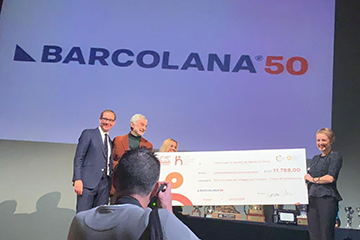 The cheque was handed by Emma Ursich, Head of Corporate Identity & The Human Safety Net, on behalf of the Generali Group to the President of CSB, Giorgio Tamburlini, during the Barcolana award-giving ceremony.

“We would like to thank the community of Trieste, which has contributed greatly, for their support and their sensitivity – Ursich said -. We’ve had the chance to underline the importance of a responsible usage of resources, of respect and collective commitment towards the safeguard of the sea and oceans, themes that are very important for Generali. At the same time, it’s been a gesture of solidarity in favour of our community”.

Last June the activities of “Un Villaggio per crescere” started in Trieste: the initiative comes from the collaboration between The Human Safety Net and the Centro per la Salute del Bambino. The educational offer given by the Villaggio supports the development of children aged 0 to 6 and the parenting skills of adults.

In the village, both parents and children can spend time together and share positive experiences such as reading, music and artistic expression with support of educators and specifically trained volunteers. The village is hosted inside the district of Valmaura to integrate already-existing services. Thanks to the donation, a specific project to reach families in risk of isolation will be started.

The Human Safety Net would like to thank Logica srl for the collection and recycle of plastic caps.